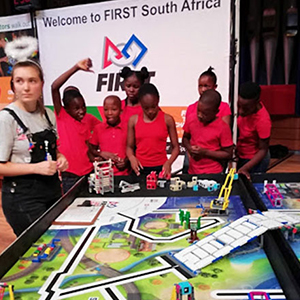 This was how 40 future JumpStart scientists and engineers got their brave on as they headed to the FIRST LEGO League (FLL) tournament at UNISA on the 12th October 2019. Last year, this group only managed to attend the 2018 National FLL Robotics competition as observers, but this year, the JumpStart Robotics team went off to Pretoria, with serious work to do.

Tucked into their backpacks, were schemes for building a new hospital for their community, complete with architect’s drawings and their LEGO Mindstorms EV3 Core kits. How different child’s play looks these days... A differently daunting prospect was competing against their age mates from Johannesburg’s elite private schools. For some, the latter was the bigger challenge.

She explained the exercise: “Just two weeks before the contest date, the challenge set and rules went to all participants. Each team had to programme an autonomous robot that would complete a series of missions in order to score points in the Robot Games. Additionally, they had to develop a solution to a problem affecting their community. The rules stipulate that the core values of teamwork, inclusivity, discovery, innovation, impact and fun remain at the centre of the activity.”

The beauty of the challenges, which are designed around topics like nanotechnology, climate change, and quality of life for people with disabilities, is that learners are exposed to potential career paths. While playing the game, learners are consolidating STEM (Science, Technology, Engineering and Mathematics) principles, which flow naturally from their participation.

Lekgau reflected on the developing teamwork in the run up to the contest. “While preparing, the children come together to identify problems affecting their community. This group identified the Natalspruit Hospital in Katlehong, which was closed because of the dolomitic sinkhole that had formed beneath it. They then identified a small plot, and came up with plans to build a five-story hospital that will provide quality health services to their community.”

“They explained their research in a presentation to the judges. To do this, they formulated the costing, square meterage of wards, how many departments were required, as well as the personnel and equipment needs. With the assistance of a friendly architect, they came up with a budget of R1,2 bn based on the cost of similar clinics.”

Time was a factor as the kits arrived in the last week of the school term, but every child made the effort to attend extra sessions while schools were closed, which was the highlight of their holiday.

“Both the scientific and the social benefits of this participation are immensely valuable. By working together on this project, valuable life skills are laid down,” said Lekgau. “Some children were anxious about talking in front of white people, so we organised a practice session with JumpStart Foundation’s CEO, Stephen Mahony, and General Manager, Callen Hodgskiss. This offered the participants a trial run in presentation skills and was a tremendously valuable confidence booster.”

Lekgau is excited by the way the children learn shoulder to shoulder, pooling their creativity and resources to create solutions for a stronger, more sustainable future.

She said, “This activity teaches them that the future built together is a future that is built better.”